In our fast-paced modern world, many people simply do not have the time or energy to read a novel. Craig Moody's NOVELBITES removes the effort and delivers a storytelling experience in a fun, easy, and atmospheric way. These smaller ‘bites’ of a larger work, enhanced with soundscape elements, will fit nicely into anyone's time-demanding day, allowing them to escape into stories while working, driving, or even at the gym. The 25-minute episode format will prolong the enjoyment and suspense of experiencing a novel. 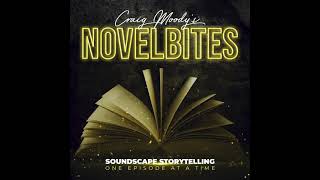 The Devil and Mrs. Trembly

Edith Trembly sees the devil. He looms large and imposing just outside her bedroom window, the window of the upstairs farmhouse bedroom she shares with her husband of fifteen years, Edgar. Appearing just as the devil illustration on eccentric neighbor Molly Jefferson’s devil tarot card, the devil begins to stalk and haunt Edith, both in her dreams and while awake. If only Edith could know her visions would soon consume her.

Life on the Trembly farm in 1933 is hard and isolating. The Great Depression has devastated the country, the Dust Bowl looms, and the crops of the Trembly farm are barely producing; the ground is hardening, and the annual income continues to dwindle. Childless, perhaps barren, Edith finds herself dreaming of another life, one more eventful and exciting, a life like her sister Beverly’s out in California, where their judgmental and disapproving mother now resides. Left alone in Oklahoma with Edgar, the stress and pressures of the dying farm and heirless marriage continue to rise and mount. Edgar’s wariness turns to desperation, and a young, handsome farmhand, Joe DiAngelo, is hired to assist in the grueling yet nearly fruitless manual labor. Edith’s discontent and unexplored lust and desires are soon focused on young Joe, although guilt and shame quickly become too much to bear, causing Edith to spiral.

Set against a sparse yet homey background, The Devil and Mrs. Trembly tells the frightening, psychological horror story of a young woman’s deteriorating mental health amid a nation’s economic struggle and the unraveling of a complicated marriage. Is it the devil Edith sees outside her bedroom window, or is it just a shadowed projection from her own twisted mind?